It’s mid-August, 1988 and my dad’s Oldsmobile is packed and ready to deliver me to my freshman year of college. Our destination: Bradley University, University Hall, floor 4a, one of the coveted Dorms of the Future!

Yes, I drew the dorm lottery prize and that meant my room was equipped with a personal computer (PC if you’re in the know) for my roommate and me to share.

This was groundbreaking and really my first known foray into using computers. We certainly didn’t have one at home—who even did? Students were told to bring their own floppy disks and our lives would be infinitely simpler and… futuristic.

My roommate, whom I will call Kindness, and I were both from the suburbs of Chicago and hit it off when we met. She tolerated all of my Big Top Pee Wee cut-outs and brightly colored decor. I couldn’t take my rainbow room with me to college, but I could certainly bring the vibe.

Sorority Rush was the first week on campus. Bradley had six national sororities and I didn’t know much about any of them. My dad’s fraternity brothers from Bradley mostly married women from one specific house, and I did have that in mind.

One house continually stood out to me because each time I walked in and met someone new, they were unique from the last person I met. While other houses seemed to have some sort of mold to fit, in my eyes Pi Beta Phi did not. They quickly rose to the top and I was hopeful I’d continue to be invited back.

Besides Rush happening that first week, my social life was taking quick form. Tammy lived just below me and her roommate, Staci, and I bonded along with some other new friends on both of our floors. By bonded, I mean we gathered together almost every night talking and drinking.

I was lucky that I was never cut from a house. I felt that the power to choose was in my court and I knew others weren’t so lucky. Each day, we’d get the news as to which houses invited us back. Every day, there were tears scattered throughout the dorm and campus in general. It was intense.

I was grateful for the distraction that it was. I found being alone almost intolerable. So, I constantly sought out other people to keep my mind anywhere but on the recent loss of my mom.

The night before the final found, the Preference Round, I overdid it.

Pref was a fancy dress-up day and if you were lucky, you got to go to two houses—one for lunch and one for dessert. I was excited to head first to the sorority of my dad’s friends’ wives and second to Pi Phi.

U-Hall had communal bathrooms. On that particular morning, I gathered up my yellow, personalized shower tote, robed up, and gingerly made my way down the hall to shower. I didn’t feel well at all.

Midway through my shower, I felt lightheaded. The next thing I knew, I was on the shower floor, the upper part of my body thrust outside of the curtain, rudely interrupting the primping of the other girls on my floor. There were a few screams.

Only one girl came over to help me. She had obviously been crying. She said she could help me because all of the sororities had cut her and she had nothing at all to do that day. Wow.

The next events were fuzzy. I got to the Health Center and it was assumed I’d fainted because of cramps. So, I was given a prescribed muscle relaxant. Have you seen the end of the movie Sixteen Candles? Where the bride takes muscle relaxants for cramps?

That was literally me. 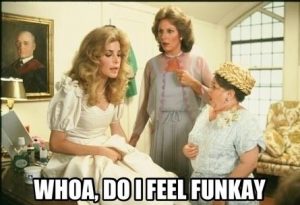 Because of all of this, I missed the first sorority lunch. Thankfully, Pi Phi was second on the docket and my first choice. I would be more than ready and got dressed, hair done, make-up on… in a completely drugged state.

My mom taught me that early was better than late and even better than on time. It was raining. I grabbed my umbrella and set off across campus. Once at the house, I simply stood under my umbrella on the sidewalk.

I noticed no one was around. Apparently, there was a break between groups and I was really early. But no worries in my mind, I wanted to make a good impression. I was oblivious to the swishing of the vertical window blinds as curious eyes kept peering out at me.

I later learned that by standing solo, early to the party, I gave the impression that I was a rogue rushee who boldly chose only one house to attend on the final day. This created a big buzz.

Eventually, more girls showed up, I was feeling extremely groovy thanks to the muscle relaxant, and the party began. By the end of the night, I was welcomed into what I knew was the best sorority for me—Pi Beta Phi.

View all posts by Karen Brothers